What is the evidence that egg production is a cause of bone quality issues?

Ian C Dunn has been working in poultry science for over 40 years. His early research focussed on photoperiod and defining lighting programmes as well as the effect of food restriction on reproduction in broiler breeders. He has since moved with the revolution in genetics and genomics to locate chromosomal regions controlling traits including egg quality, broodiness and bone strength and developing new phenotypes for the traits.

His interest in endocrinology helped locate the genetic locus explaining the largest differences in growth in poultry and the gene responsible for a genetic locus contributing to bone strength. The sector continues to use genetics and physiology to develop strategies utilising traditional or genomic selection to tackle problems as diverse as osteoporosis in laying hens, growth and reproduction in meat-type birds or egg and shell quality in laying hens. These traits all have socio-economic importance to the poultry sector.

The belief that selection for increased egg production is a cause of bone quality issues in laying hens has been widespread. However, the evidence that there is a link between the rate of lay and bone quality does not support this. A number of pieces of evidence reinforce the need to find alternative explanations. Issues of bone quality, in particular, the keel have existed long before modern hybrid breeding.

Comparisons of high versus lower producing lines do not show a consistent trend in bone quality. Within line comparisons do not support egg laying number as a factor in bone quality nor did selection experiments. Problems with bone quality appear to be more likely earlier in a hens laying life, suggesting the issue is not with the number of eggs laid.

Other explanations for problems with bone quality need to be examined including the design of the housing, the level of activity, the control of puberty, enabling selection for skeletal quality and of course continually ensuring optimal nutrition during rearing and laying.

It is a meme that high egg production in laying hens is an explanation for poor bone quality.

It is said that the increased egg production produced by genetic selection has contributed to this, particularly in the manifestation of keel bone damage.

A recent publication originating from a COST action on the topic of keel bone damage recognised the fact that there was a need to find alternative reasons for bone damage and that whilst egg production number might contribute, evidence for it was poor (Toscano et al., 2020).

WHY DOES EGG PRODUCTION SEEM UNLIKELY AS A MAJOR CAUSE OF BONE QUALITY ISSUES?

If as it seems the number of eggs a hen lays is not a major factor in issues of bone quality what are the likely causes? These were rehearsed in the review in 2020 (Toscano et al., 2020). The potential factors identified were age at puberty, late ossification of the keel, bone disease and low mobility. The obvious factor missing is the environment which was assumed to be a cause of damage in the review. We should also never forget nutrition. If the supply of calcium during rearing or laying is not optimal problems of bone quality occur. This is rapidly obvious when we manipulate calcium and phosphorus ratios during lay (Figure 2).

There have been many studies that look at the hens environment, specifically alternative systems with a complex system of furniture versus cages that have very limited obstacles.

Despite the increased chance of movement allowing the development of stronger bones most studies find that the incidence of damage is greater in alternative systems (Sandilands et al., 2009).

Reduced mobility as in all animals reduces bone strength. Giving hens the opportunity to exercise always results in better bone strength e.g. (Casey-Trott et al., 2017, Fleming et al., 2006, Regmi et al., 2015). The important caveat is that must not result in increased opportunity for damage as outlined above. 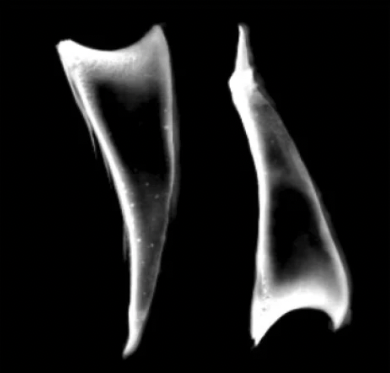 Figure 2. Radiographs from an experiment manipulating calcium and phosphorous levels. The keel on the right has distortion and possible fractures at the caudal end of the keel

The timing of sexual maturity is probably an important factor in ensuring good bone quality.

A relationship was observed at the genetic level between puberty and bone quality in one line but not another (Dunn et al., 2021). Events at puberty are complex and the issue of body weight and skeletal development are linked in a complex genetic interaction.

However puberty can also be manipulated by diet and light, unfortunately getting the evidence for these management factors on bone quality has been relatively difficult.

One study that did associate puberty with bone quality indicated hens without keel damage reached puberty later (Gebhardt-Henrich and Fröhlich, 2015). The fact that the keel bone is late to ossify may make it more susceptible, but this has not been tested.

In conclusion, the issue of bone quality in laying hens is a complex one. If there are to be improvements there needs to be reliable methods to make genetic progress. But progress can be made as it has been possible to reduce the incidence of damage by retrospective selection (Fleming et al., 2006), but that is not practical for normal genetic selection. Targeting management and nutrition alongside genetics should mean it is possible to improve the skeleton to a level where damage is unlikely, although it will never be possible to eliminate risk from the environment completely. As Darwin was aware, it should also be borne in mind that the keel in a chicken is a structure that has likely been under natural selection to reduce in size and possibly mineralisation due to his hypothesis of disuse. This was happening long before modern genetics were applied to poultry.

(2018b) Influence of a Sustained Release Deslorelin Acetate Implant on Reproductive Physiology and Associated Traits in Laying Hens. Frontiers in Physiology, 9.

in laying hens as a tool to identify causative factors for keel bone fractures and means to reduce their occurrence and severity. PLoS ONE, 13.

for keel bone fractures in laying hens: are there explanations in addition to elevated egg production? Poultry Science, 99: 4183-4194.

Our site uses cookies in particular to
improve or speed up your future visits.

Below we give you control over which
cookies you want to enable.

This website uses cookies to improve your experience while you navigate through the website. Out of these, the cookies that are categorized as necessary are stored on your browser as they are essential for the working of basic functionalities of the website. We also use third-party cookies that help us analyze and understand how you use this website. These cookies will be stored in your browser only with your consent. You also have the option to opt-out of these cookies. But opting out of some of these cookies may affect your browsing experience.
Necessary Always Enabled
Necessary cookies are absolutely essential for the website to function properly. These cookies ensure basic functionalities and security features of the website, anonymously.
Analytics
Analytical cookies are used to understand how visitors interact with the website. These cookies help provide information on metrics the number of visitors, bounce rate, traffic source, etc.
SAVE & ACCEPT